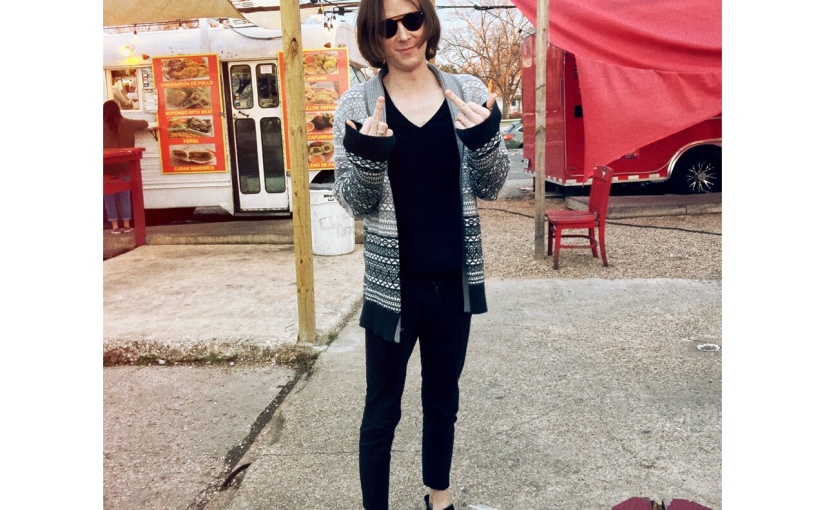 2018, a year that was single handedly the most painful, interesting, intense, exhausting, exciting, and freeing your if my entire life. Starting in January when I said “2018 will be a much better year” to today ready for tonight to come so I can just be out of 2018. January I got to see Bon Iver with my ex and had a BLAST then things started getting really crazy really quick.

The end of January into early February me being transgender was never more certain and it was literally killing me keeping it inside. I reached out to several people and even posted something in Facebook that later would be called out on as shaming and that created my “coming out.” On February 14, 2018 I came out as a lot of you know and have had an intense year.

I came out and started looking for work which there was non in Tyler, Tx at the time and by April it was just time for me to move. Having two kids and a wife my mind was all sorts of fucked up because growing up evangelical I learned what I was about to do is wrong and I’ll burn in hell. But, I moved to Austin, Tx because I really didn’t have any other choice. Once I got here life was just one giant bowl of mush. I felt like I couldn’t think strait and everything was spinning out of control.

I lived in an apartment for the first two weeks busting ass to make rent for what become the best house I’ve ever lived in. I made I made rent in time and got to move to “really” start this life. I did Uber’s and worked my attendant job till I couldn’t do Uber’s anymore. Then I got hired at a 7/11 and shortly after getting hired my car got broken into. I was crushed I just wanted to give up like so many other time this year. But, my roommates kept me alive and my friend who I’m an attendant for kept me alive.

After my car got broken into I started having daily panic attacks. I still have panic attacks but not every day and I’m thankful for that. Anyway, I worked at 7/11 until I couldn’t anymore because of the shit environment. The day I quit I had the heaviest panic attack of my life. Old leaders from ywam where yelling in the back of my head telling me I am worthless and going to hell all spinning around in my head until I collapsed. I couldn’t deal with it so in a second where I could think straight l decided to drive to the beach.

I got to the beach 4 hours later not knowing how the fuck I got there and a giant mess. I got out of my car and got on the beach where I melted because standing on the sand brought back so much nostalgia (good and bad) that I just needed to sit there. It helped calm me down enough to go home and finally fall asleep since I had been up nearly 48 hours. After that trip things seemed to mellow out a little bit I was “ok” but not in a good state of mind at all.

I was able to go full time as an attendant and luckily that is what I did because if I would of ended up anywhere else I wouldn’t be here today. Her and her family have kept me alive through the thick and thin of this year and I’m so thankful. In October though it seemed like nothing was going to help. When trump decided he wants to erase trans people I lost my mind. I didn’t sleep. I didn’t eat. All I did was go to work in a constant state of panic hoping to make it just another five minutes. I pushed through and was able to make it.

In late October 2018 I came up with a photoshoot/wine and cheese night for trans and non binary folks that has turned into something much larger than I could of imagined. “REFLECT” has lifted me up to where my shoulders are out of the water and I’m able to breath. I’m able to sleep. I’m able to eat. Do I g this as a side project has been so life giving and brought back hope.

So here we are, December 31, 2018 7:30 am I’m sitting in my car writing out my year while smoking a cigarette and ready for this year to end. This year has been learning how to live my best life along with living my worst life all at the same time and it has been total mind fuckery. I’ve made it though and I’m walking into 2019 living my best life. So, to everyone who has had New Years already happy New Years and to those of us who have it coming up, let’s kick 2019’s ass and make it our BEST year yet!